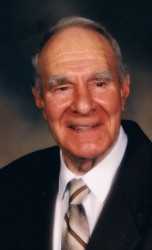 Dr. Norman D. Lane – Dr. Norman Douglas Lane passed away peacefully in his sleep in Hamilton, ON, on August 6, 2014 at the age of 94. Norm was a renaissance man, a family man, and a devoted husband to the love of his life, Doris, over their 71 years of marriage. Parents Maude and Harry, brothers Les and Ken and sister Shirley predeceased Norm. He was the proud father of five sons – Douglas (Ann), Brian, Stephen (Brenda), Alan (Robin) and Christopher (Cristina); and nine grandchildren – Michael, Andrea, Carolyn, Dorian, Alyssa, Chloe, Hudson, Amanda and Ryan. Norm was born on Nov. 6, 1919 in Toronto.  He earned his PhD in Mathematics from the University of Toronto and was a distinguished professor at McMaster University in the Department of Mathematics and Statistics from 1952 to 1987. Norm was also a world-class canoeist, competing in two Olympic games: London 1948 (Bronze Medalist in the C-1 10,000 M) and Helsinki 1952 (finished 5th). Throughout the 40’s and 50’s, he competed in Canadian and North American canoeing regatta’s, winning numerous championships. Norm was a lifetime member of the Balmy Beach Canoe Club and also an accomplished gymnast. Home away from home was the family cottage on Buck Lake, near Kingston, where since the mid 60’s, the family spent each summer. It became a labour of love as Norm spent many summers finishing the interior, landscaping, canoeing and clearing the shoreline. A Celebration of Norm’s Life will be held at Binkley United Church, 1570 Main Street West, Hamilton, ON L8S 1E8, on Monday, August 11, 2014. The visitation will take place at 10:00 AM with a service to follow at 11:00 AM. In lieu of flowers, memorial donations may be made to the Norman Douglas Lane Bursary Fund, McMaster University, 1280 Main St. West, Hamilton, Ontario L8S 4L8, Reg. Charity # 119035988RR0001.