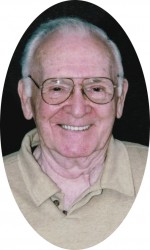 Clapham, Charles John (Chuck) – December 16, 1924 – July 9, 2014.  In his 90th year after a brief battle with cancer Chuck passed peacefully at Dr. Bob Kemp Hospice in Hamilton surrounded by family.  Predeceased by his wife Thelma, son Chuckie, daughter Joanne and great-grandson Carson.  Chuck will be sadly missed by his children Greg (Renee), Ione (Bob) and Rusel (Rosina) and fondly remembered by his 4 grandchildren and 4 great-grandchildren.  He is survived by his loving sister June and her family.  He will be fondly remembered by cousins, nieces and nephews.  Chuck will also be sadly missed by his close friend Rosalie and the Lancaster family.  Chuck was a dignified World War II Veteran.  He was a supervisor at International Harvester, and a Plasterer by trade.  He also co-owned a video game store in Westdale.  He was a volunteer and member of the Dundas Senior Citizen Club.  Chuck was also a proud 40 year AA member with Triangle Action Group and a great supporter and friend to many in the organization.  He loved golfing, photography, playing pool, gardening, hunting, fishing, playing cards and a huge Hamilton Tiger Cat fan.  The family wishes to recognize the care and support he received from the wonderful staff involved with CCAC, VON,  Paramed and also the assistance he received from Veterans Affairs Canada.  Cremation has taken place.  A gathering of family and friends will be held at the Cattel Centre, 45 Main Street, Dundas (next door to funeral home) on Thursday, July 17, 2014 from 5-8 p.m.   As an expression of sympathy a donation made to Camp Trillium would be  appreciated by the family.