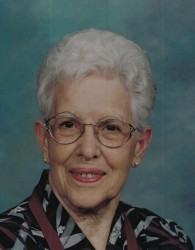 Peacefully at Alexander Place in Waterdown on Thursday, April 10, 2014 in her 89th year.  Marjorie was predeceased by her loving husband Robert in 1998.  Cherished mother of Gale (Paul) Millsap, Bob (Sue) Tunis and Nancy Tunis.  Marjorie was predeceased by her brother Henry and is survived by her sisters Verna, Anna and Shirley.  She will also be sadly missed by her grandchildren John, Jennifer, Brett, Andrew, Scott and Jason as well as great grandchildren Grace, Libby, Luke, Kaylan and Sloan.  Marjorie was the past president of the Dundas Figure Skating Club and an avid supporter of the Dundas Community and the Jr. B’s.  Friends will be received by the family on Sunday, April 13, 2014 from 2-4 & 6-8 p.m. at the Cattel, Eaton & Chambers Funeral Home, 53 Main Street, Dundas.  A private service will take place.  Interment Grove cemetery.  In lieu of flowers, donations to MacKids would be appreciated by the family.