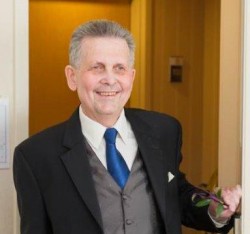 With saddened hearts we announce the passing of Martin James McGrath, after a long and hard battle with cancer on Saturday, Febraury 15th 2014.  Beloved husband of 39 years to Sylvia (McManus) and loving father to Megan (Dave Randell) and Colleen.  His family was by his side when he passed.  Many cherished memories of happier times will be shared by those who knew and loved Martin.  He will also be remembered by his sister Mary (Tom Niggemann)  and brothers Gerald (Suzanne Davidson) and Kevin (Patricia Mahoney) sister and brother-in-law Charlyne and Paul Carrier, and many nieces, nephews, their spouses and grand-nieces and nephews.  He is predeceased by his parents Irene and Gerry McGrath and sister Ursula (Bill Boeh), and his in-laws Margaret and Tommy McManus.  Martin taught for many years in Huntingdon, Quebec and Mildmay Ontario.  He was involved in refereeing, hockey coach, scouts, Optimist Club and Christopher Leadership Courses.  Friends will be received by the family, on Wednesday, February 19th in the afternoon and evening from 2-4 & 7-9 p.m. at the Cattel, Eaton & Chambers Funeral Home, 53 Main Street, Dundas.  A Graveside Service for Martin will take place at Holy Cross Cemetery, 620 Governor’s Rd. East, Paris, Ontario on Thursday, February 20, 2014 at 11 a.m.  Cremation has taken place.  In lieu of flowers, donations can be made to a charity of choice.