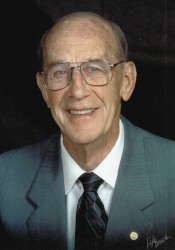 Gent, Duncan Stanley “Dunc” – Peacefully at Wentworth Lodge on Tuesday, February 11, 2014 in his 89th year.  Dearly loved by his wife Beatrice (Elkin); his sons Thomas (Marlene) and William (Leesa); grandchildren Michael, Nadine and Spencer and great-grandson Ethan.  Predeceased by his first wife Nellie (1997) and sister Joyce Lord and her husband Stanley. Dunc was well accomplished; he began as a carpenter, apprenticing at the age of 14, learning old school methods which attracted people seeking out his expertise; he was in the Merchant Navy in WWII; was a long time member of St. James Anglican Church; was one of the founding members and member for 50 years of the Police Male Chorus; member of the Probus Club; member of the Masonic Lodge #593 and continued on in the 1950’s to be a Police Officer, retiring as a Sgt. from the identification branch (forensics) in 1984. He was an avid gardener, winning the JC and Trillium awards several times, enjoyed cottage life, fishing and the great outdoors.  Friends will be received by the family on Friday afternoon and evening from 2-4 and 7-9 at the Cattel, Eaton & Chambers Funeral Home, 53 Main Street, Dundas.  Dunc’s Service will take place on Saturday at ST. JAMES ANGLICAN CHURCH, 137 Melville Street, Dundas at 11:00 a.m.  Interment White Chapel Memorial Gardens.  If you so wish, donations to St. James Anglican Church or a charity of your choice will be appreciated by the family.