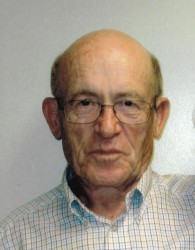 August 27, 1941 – January 21, 2014
Husband to the lovely Marilyne Creer, proud father to Susan Creer and Robert Creer and loving grandfather to Andrea and Heather. Also sadly missed by Dena Creer and Sarah. Peter and Marilyne celebrated their 50th wedding anniversary surrounded by family and friends on September 15, 2012. Peter had a very full life: he was born in Liverpool, U.K. and emigrated here with his family in 1956. He worked for 43 years at the Hamilton Spectator as a machinist. He canoed and camped with his family in Algonquin Park for he loved exploring nature and there were many camping trips across Canada and the U.S. also. He adored camping with his granddaughters and having water pistol fights with them. Peter built Soapbox cars with Robert and ruined Marilyne’s frying pans melting lead to make weights. He was also a keen amateur pilot with the RAA (Recreational Aircraft Association  – homebuilt) club. He originally flew out of Guelph but now is a member of the RAA Flamborough Chapter 247. He enjoyed working on cars, bowling, watching his children and grandchildren with their various activities and was always sharing their achievements. Peter was also involved for over 30 years with the 735 Dundas Firebird Royal Canadian Air Cadets Squadron Sponsoring Committee. He adored the ‘Calvin and Hobbes’, ‘Giles’, ‘Andy Capp’ and the ‘Pickles’ comic series and we will miss him terribly. Friends will be received by the family for a visitation on Thursday, January 30th 2014 from 1 p.m. until 2:30 pm.  Immediately following the visitation there will be the Celebration of Peter’s Life at 2:30 p.m. at the Cattel, Eaton & Chambers Funeral Home, 53 Main Street, Dundas. In lieu of flowers, donation to the Huntington Society of Canada or The  War Amps would be appreciated by the family.