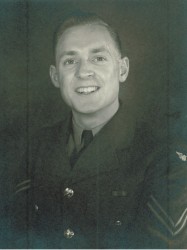 Kelly, William Elwood –  Bill was a long time resident of Dundas and passed away
peacefully on Tuesday, December 10th 2013 at St. Peter’s Hospital.  He has made the journey to be with his long time love Mary (predeceased January 5, 2010),  Missing him are his children, John (Rose Marie), Brian, Catherine (Paul) Castellan and Becky (Ralph) Meyer.  Bill had 6 grandchildren, Michael (Mindy) Kelly, Shannon Kelly, Erin (Dan) Exley, David (Suzy) Castellan, Nicholas Meyer, and Chelsea Meyer.  He will also be missed by 5 great grandchildren, Emma and Aiden Castellan, Lara and Zoe Exley and Ashlynn Kelly.  Dad was a WWll Veteran serving in the R.C.A.F.  He was very proud of his time in the service and shared many stories with family and friends. He was the Past President and long time member of the Hamilton Air Force Association, a very talented artist and woodworker.  His creations never ceased to amaze.  Many thanks to the nurses and doctors of 8S at the Hamilton General for their care and patience with our dad,  the wonderful staff of Bertram Place as well as the staff at St. Peter’s Hospital with a special thanks to Megan for holding his hand while he passed.  Friends will be received by the family on Tuesday, December 17th from 10 a.m. until the Celebration of Bill’s Life at 11 a.m. at the Cattel, Eaton & Chambers Funeral Home, 53 Main Street, Dundas. Cremation has taken place.  In lieu of flowers, donations to The Lung Association would be appreciated by the family.