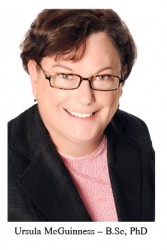 With her family at her side, Ursula passed away suddenly at St. Joseph’s Hospital Hamilton, on November 2nd, 2013 at the age of 58.  Ursula leaves her cherished children Caitlin Lazarus and Brennan Lazarus, her devoted partner Brian Underdown and her extended family Eric, Russell, Margot, Julian, Aubrey and Vivien Underdown.  She will be sorely missed by her sister Jackie McGuinness and brother in-law John Boisvenue and her dear cousin Laura O’Connell.  Born in Dublin and growing up in Montreal, Ursula was from her earliest years an adventurer.  After graduating from McGill, she joined CUSO as a teacher in Nigeria and travelled fearlessly through Africa in troubled times and other exotic places which influenced her decision to develop a career as a scientist devoted to vaccine research.  Settling in Hamilton in 1998 Ursula developed a successful practice as a patent agent with Gowlings.  Her family will remember her bright spirit, the many shared dinner conversations and her loving support. A visitation will be held on Wednesday evening from 7-9 p.m. at the Cattel, Eaton & Chambers Funeral Home, 53 Main Street, Dundas.  A Service Celebrating Ursula’s Life will be held at the Funeral Home on Thursday November 7th at 2 p.m.   In lieu of flowers, donations to St. Joseph’s Hospital, Hamilton, would be appreciated by the family.