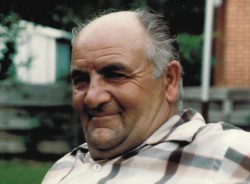 Pic, Edward – Peacefully at the Juravinski Hospital with his daughter by his side, on Wednesday, August 7, 2013, Edward Pic, age 90 years. Loving father of Clara Dunbabin and cherished grandfather of Angela Dunbabin (Conrad Walker). Dear brother of Anne and Stanisla of Poland and predeceased by his wife Angela and siblings Joanne, Helene and Joe. Fondly remembered by sister-in-law Louisa and cousins Mario and Laura of England and friend Sophie.  In 1939, Edward left Poland and was held in Germany until 1945. He served in the Polish Army at the end of World War II. He moved to England in 1946 and worked as a coal miner in Manchester. In 1967 he immigrated to Hamilton, Ontario and was a proud member of Stelco, Local 1005. Thank you to St. Joseph’s Villa, Trillium Lane for their care and compassion for Edward. A private service for Edward will be held on Saturday, August 10, 2013 at 11:00 a.m. at the Cattel, Eaton & Chambers Funeral Home, 53 Main Street, Dundas. Private Interment. Donations to the Arthritis Society would be appreciated by the family.