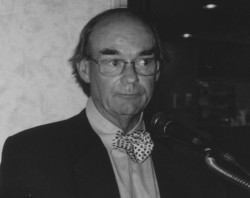 William Newton, Bill died at the Hamilton General Hospital, on Saturday, July 20, 2013. He is survived by his wife Jeanette (Jo) of 47 years,  daughter Monique, sister Terri and her family, as well as many cherished family and  friends, and Dormie, his beloved Australian shepherd.  Bill was co-founder and executive director of the Stanley Thompson Society and enjoyed five decades as an established graphic designer, winning national and international awards for his work.  We will remember Bill best in his garden, ruminating on his creative – if somewhat unfinished – garden projects. And admiring his wildflowers.  A Celebration of Bill’s life with his friends and colleagues will be held in early autumn.  A Funeral Service will be held at the Cattel, Eaton & Chambers Funeral Home, 53 Main Street, Dundas, on Wednesday, July 24th at 11a.m.  A burial will take place on Thursday, July 25th for the family.  In lieu of flowers, donations can be made to the Stanley Thompson Foundation for educational support (www.stanleythompsonsociety.com).