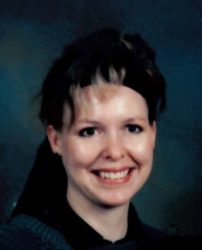 Peacefully at home with family members present, Janine passed from us, ending a lengthy battle with ovarian cancer. Beloved wife of Fletcher G. Hunt (m. June 30, 1978) and mother to James, William, Gordon, Rebecca (husband Sylvain Boudreau), Charles (Sheridan) and Tara (husband Joel Vienneau) – a role model and inspiration to all whose paths she crossed, but especially to her husband, children and six grandchildren.

Predeceased by parents Leonard and Emily (nee Kallio) Booher, step-father Lloyd Workentine and by sister Shaline and brother-in-law Salah Adam who, along with children Joshua and Rebecca, were taken tragically as a result of the Air Egypt crash in 1999. Survived by brothers Rodney (Joy), Raymond (Debbie) and sister Nella (Randy) Lall.

Janine was a graduate of The University of Calgary, where she majored in The Humanities. Her life-long love of music and the care she consistently showed for young people combined, in recent years, to give Hamiltonians a highly thought of and cherished teacher, with certification as a specialist in piano and the music of Carl Orff.

A private family Service will take place with interment to follow in Grove Cemetery, Dundas, Ontario. Donations to a charity of choice, in Janine’s name, would be appreciated by the family.