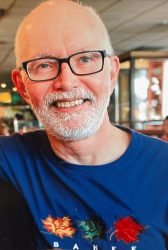 The Reverend Stephen John Hallford was born on May 17, 1954.  He peacefully left his earthly existence on September 27, 2020, a beautiful, sunny Sunday morning, just as the leaves were beginning to turn.

A humble man, he preferred to simply be called Steve.  He would never announce to anyone that he was a priest and he wasn’t one to preach.  He lived a good, honest, thoughtful, and gentle life that was a tremendous comfort and example to many.

Steve grew up in Oakville, went to Trent University, the University of Toronto, and finally to the Vancouver School of Theology where he earned his Master’s of Divinity and was soon ordained as an Anglican priest.

His role in the Anglican church took him all over western Canada.  Over the years he had parishes in B.C. in Lumby and Vernon, then in Alberta including Camrose, Calgary and Edmonton, and most recently at Christ Church in Flamborough, Ontario, behind which will be his final resting place.  He chose a lovely spot in the cemetery there under a very old maple tree.

Steve was happiest in nature, whether hiking in the Rockies or paddling his canoe in Muskoka.  He was a voracious reader, a good cook, and an even better listener.  Children, adults, and animals alike were all drawn to his quietly gentle demeanor.

The family would like to thank the wonderful medical teams at the Juravinski Cancer Center, the VON nurses, and finally everyone at the Dr. Bob Kemp Hospice who took such good care of Steve until the very end.  A special thank you to friend and retired Anglican priest, Peter Davison, who was a dear friend and spiritual mentor throughout Steve’s illness.

In lieu of flowers, donations to the Primate’s World Relief and Development Fund (PWRDF), Christ Church (Flamborough), or the Dr. Bob Kemp Hospice would be greatly appreciated.

A private graveside service will take place on October 2nd with a larger celebration of his life to be announced at a later date.