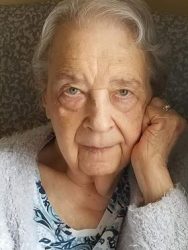 Very few people live a life that spans a century, but we knew that she was ready to go. It’s just hard for those of us who are left to turn the page. Born in Hamilton, Dorothy also lived in Deep River and Ottawa, but the Dundas/Hamilton area was where she considered to be her home. She left the Hamilton area in 2008 after her husband (John B. McDougall) of close to 70 years died and moved up to Ottawa where she died at Granite Ridge Community Care on August 4, 2020 after a long illness. Those who are left to mourn include her daughter Valerie Carey of Espanola, grandchildren Ian Carey (and wife Terra and daughter Abbie) of Niagara Falls and Heather Carey (and partner Richard Fournier and children Willow and Hunter) of Spanish, sister Gail Brooks of Dartmouth, Nova Scotia, and several generations of nieces and nephews. Her parents (Edward and Bessie Pitcher) and brother (Fred Pitcher) predeceased her. She was a member of Dundas Baptist Church for over 60 years. As the church was very important to her, we would ask that donations in her memory be made to Dundas Baptist Church. A memorial service will be held on Saturday, September 12th at 11 a.m. at Dundas Baptist Church. If you wish to attend please sign up using this link: https://tithe.ly/event-registration/#/2338107. Special thanks for the extraordinary care and compassion shown by the staff at Granite Ridge during this difficult time.