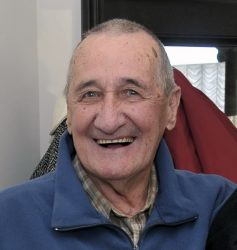 Dieter lived his long life with compassion and intensity. He passed on at home surrounded in love, with his daughter and son-in-law by his side. Dieter was predeceased by his beautiful wife Toni, his sisters-in-law Julia and Irena, his brothers-in-law Walter and Nestor and his nephew George. He is survived by his daughter Monica, his son-in-law Phil McColl, his son Robert, his nephews Leo (Iris), Edward, Henry, Mike (Carolin) and Peter (Danusia), as well as several great-nieces, great-nephews, step-grandchildren and step-great grandchildren.

Dieter retired from Toronto Ambulance in 1998 after more than three decades of service. He was noted for his passion and integrity and for being there for anyone who needed him.

After retirement he remained active with the Toronto Paramedic Pioneers, reluctantly missing the Christmas luncheon the day before he died. Dieter was also an avid supporter of the ultrarunning community and was known and loved by ultrarunners across Canada for his energetic through-the-night aid stations that boasted ample home-made (aka “Toni-made”) food, expert first aid and that gentle push (“beware of the chair”) that a runner needs 80 miles into her 100 mile race.

Although Dieter (and Toni) only moved to Hamilton in 2009, he immersed himself in the community with the same gusto that he brought to every part of his life and he leaves behind many friends including those at the SAM Central Program and at the Village of Wentworth Heights, especially dear Natalie Arruda.

Cremation has taken place. A celebration of Dieter’s life will be held at the Turner Family Funeral Home, 53 Main Street in Dundas on his 90th birthday Sunday, January 5, 2020 from 2:00 pm to 5:00 pm. Be ready to share Dieter-stories! In lieu of flowers, donation can be made in Dieter’s name to the Alzheimer’s Society (in memory of Toni).