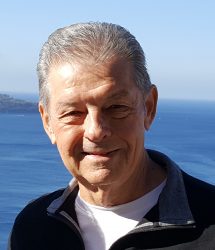 Peacefully at the Stedman Hospice on Wednesday, March 6, 2019, at the age of 71. Only son of Mildred and the late Frank Sr. Beloved husband for almost 50 years to Janet (nee Sharpe), and loving father to Barbara Oakes (the late Rich) and Phil (Tammy). Involved grandfather of Clayton, Ashley, Hunter, Sadie, Cooper and Connor. Frank will be sadly missed by his 4 sisters; Kathie Flaherty (Mike), Janis Butler (Ed), June Gray-Wheeler (Donnie), Laurie Mysko (Glenn), the Sharpe family, and many nieces and nephews. Frank was a former member of the BMHL Hockey League, the Copetown Oldtimers Baseball League and was a former member and Past President of the Copetown Lions Club. Frank’s passions were golfing, his family (especially his grandchildren) and being a friend to all. Friends are invited to the interment Friday, March 8 at 12 noon at Mt. Zion Cemetery, Copetown, followed by a Celebration of Frank’s Life at the COPETOWN COMMUNITY CENTRE, 1950 Governor’s Road, Copetown, at 1 o’clock, with sharing of memories and stories at 2. Reception following. In lieu of flowers, donations to the Copetown Lions Club or Margaret’s Place Hospice would be appreciated by the family.