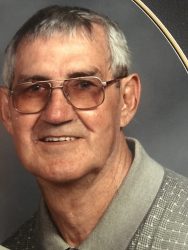 WALSH, Stuart John – Died August 29, 2018 peacefully at his home surrounded by his loving wife Vivian and daughters, Beth (Victor), Christine, and Lynn (Dave).  In death, he joins his beloved son Dannie (died 1978).  He is the cherished grandfather of Michael (Amy), David (Amanda), Erinn (Andrew), Shaun (Diana), Dannie, Scott and Sarah (Matt), great grandfather of Mark , Leo and Giuliana and uncle to Penny (Doug), father to his chosen  daughter Nicole and best friend to Donnie.  Stuart was born in Saint John, New Brunswick on September 16, 1934, one of 10 children, he is survived by his brother Ronald (Renee).  He was an avid sportsman; hockey was his passion. In fact, he continued to play hockey until he was 60.  He was a lifelong railway man beginning as trainman at the CPR in Saint John until he retired from Dofasco in 1999.  Stuart was a longstanding member of St. Joseph’s Church where he served as an usher.  He will be greatly missed by the many members of his extended family, his friends, neighbours and his church community.  Visitation from 9-11:00 a.m.  followed by Service at 11:00, Saturday, September 1, at ST. JOSEPH’S CHURCH, 260 Herkimer St. Hamilton, ON.  In lieu of flowers donations can be made to St. Joseph’s Church or Parkinson Canada.