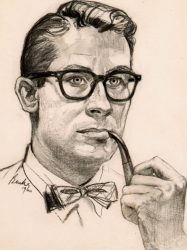 Measner, Donald Allen – Passed away peacefully on Saturday, May 5, 2018 at Hamilton General Hospital, Neuroscience Ward, with his wife Josephine Meeker and his niece Wendy Nelson by his side.  Born in Osceola, Wisconsin on the St. Croix River, on January 29, 1925, he was the youngest of nine siblings born to Edward and Mary (Busch) Measner, two of whom died in early childhood.  He is predeceased by the others, but has many, nieces and nephews and grandnieces and nephews in Canada and the United States.  He was also predeceased by William “Bill” Meeker and Edythe Meeker.  His studies at the University of Michigan, Ann Arbor, where he studied Landscape Architecture, were truncated by the 2nd World War when he served his country in the European Theatre in France, Germany (Saarland) and Austria.  His battalion returned for redeployment to the Asian Theatre when the war ended.  After some time, serving as a Landscape Architect in Arlington National Cemetery, he taught Cartography in Fort Belvoir, Virginia in the Engineer School.  His next posting was to Turkey, where he was assigned as a Geographic Attache on a team with the American Embassy in Turkey.  The team traversed most roads in Turkey.  Describing by word, map, and photograph the physical geography and human aspects of the landscape from horizon to horizon.  On return to the USA he entered private life as a Cartographer and Map Editor at Rand McNally and Hagstrom in New York City.  He and Jo met in graduate school at Columbia University in New York City where both were studying in the Department of Geography.  He left again for Turkey where he was studying “The Role of Sugar Beets as an Economic Innovator.”  During this time he lived and studied the industry in many villages in Central Turkey in the region of Kayseri.  As the result of some publications in USA, claiming that North American Academics were really spies, all American academics in Turkey were forced to leave the country.  After his return to USA he and Jo were married at McMaster University Chapel on June 22, 1968.  They enjoyed many years of being Geographers together and theirs has been a marriage of true kindred spirits.  He was active in the Thorold Horticultural Society where he was a Director and was honored with a “Life Membership”.  He was also a Director on the Ontario Horticultural Society.  He was awarded the Queen’s Confederation Medal for his contributions to his fellow citizens and his community.  His best-loved work was as Cartographer and Map Editor on the National Historical Atlas of Canada Project, Volume II, The 19th Century which may be found in schools and libraries around the world.  He was a true renaissance man; he loved people and was often called upon to help others, which he did with a great heart and caring.  Cremation has taken place and there will be a private family Graveside Service for the interment of ashes, at the Meeker Family Plot in the Hamilton Woodland Cemetery.  A “Celebration of Life” will take place at a later date, as also, will the interment of ashes in the Measner Family Plot in Farmington, Wisconsin.