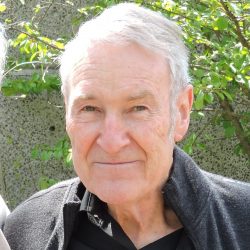 Bell, Russell Arthur – Passed away peacefully, with his family by his side, at the Hamilton General Hospital on Tuesday, October 3, 2017.  Dearly loved and missed by his wife Sallie of 55 years; his children Stuart (Stacey Farkas), Shirley (Gary Edwards) and Bronwyn Bell; grandchildren Alexis, Blake, Saige, Koen, Jaycob and Emma and by his brother Graeme (Elaine). Predeceased by his granddaughters Sydney and Angel. Russell was adored and will be sincerely missed by so many extended family, friends and loved ones here in Canada and in England, New Zealand and Australia. Russell was born in Christ Church, New Zealand to Arthur and Inga Bell on February 3rd, 1935. He obtained his first university degree, a Bachelor of Science from Victoria University, Wellington, NZ. He completed his Masters in Organic Chemistry from the University of Wisconsin and his PhD at Stanford University during which time he met, fell in love with and married Sallie. After a few moves, Russell and Sallie settled in Dundas, Ontario when Russell obtained a job with McMaster University where he worked for over 30 years. Russell became a highly respected Chemistry Professor who had a significant impact on many students and colleagues. He continued to participate in university matters throughout his retirement years.  Russell loved to travel and he and Sallie had many adventures together including sabbaticals in France, England and Australia. In addition to travelling, Russell enjoyed gardening, working on endless ‘projects’, enjoying the theatre with friends and most of all, spending cherished time with family. Russell was a kind and gentle soul whose great love, strength and wisdom remains in the legacy of his children and grandchildren.  Friends will be received by the family on Saturday afternoon from 2 – 6 at the Turner Family Funeral Home, 53 Main Street, Dundas.  A Celebration of Russell’s life will follow at 88 Hopkins Court, Dundas at 6:30 p.m.  In lieu of flowers, memorial donations to the Salvation Army, Russel’s favourite charity, would be appreciated by the family.