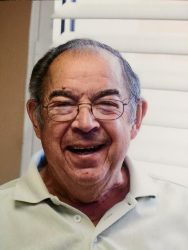 BURGESS, George Henry: with heavy hearts we announce the peaceful passing of George at Wentworth Lodge in his 93rd year on July 28, 2017. He is survived by his loving wife of 65 years, Lee Burgess (nee Liota), his cherished children: Phil (Mary Linda), Carol, Aida Hyshka (Tim), and his beloved grandchildren: Tricia Catizzone (Chris), Annamarie.  He will be sadly missed by his nieces, nephews and many friends.  Predeceased by his parents, brothers, sister, sisters-in-law, and brothers-in-law. George was a WWII air force veteran having served on the West Coast of Canada.  He worked for many years for Aylmer/Delmonte.  He was a Faithful 4th degree Grand Knight with Bishop Ryan Assembly 868 Knights of Columbus.  He volunteered several years with Knights of Columbus McGivney Homes and St Joseph’s Villa Foundation.  He served on the local Dundas Hydro Commission.  George had a passion for music and was a past member of both the Mohawk College Choir and St Augustine’s Church choir. Heartfelt gratitude goes out to Dr. James Williams and staff, staff and volunteers of Wentworth Lodge and staff of Georgian Retirement Residence for their compassionate and loving care. Friends will be received on Tuesday morning from 9:30 – 10:30 at the Turner Family Funeral Home, 53 Main Street, Dundas. Funeral Mass to follow at 11 o’clock at ST. AUGUSTINE’S CHURCH, 58 SYDENHAM ST., Dundas with reception to follow. Interment will take place at St. Augustine’s Cemetery in the afternoon.In lieu of flowers, donations may be made to the  Canadian Diabetes Association or the Hamilton-Halton Alzheimer Society.