McColl, Phyllis Irene (nee Burrows) – In loving memory of Phyllis Irene McColl (nee Burrows) who died peacefully on Wednesday, June 7, 2017, in her 97th year.  Phyllis is survived by her children Philip McColl (Monica Scholz) (Ruth Belch) and Andrea  McGrory (Paul McGrory) and her grandchildren Katherine Gill (Jared Gill), Rebecca Young (Travis Young), Francesca Loftus (Corey Loftus) and Macoll McGrory (Ellie Craig) and her great grandchildren Ashley and Piper Gill, Peyton and Madison Young, Theodore Loftus, Lily and Ava McGrory and her nieces and nephews George, Barb, Rosilyn, Marie, Sandy, Raymond Ruth, Alida, Keith and Kim.  Phyllis was preceded in death by her husband Clark ‘Barney’ McColl and  her brothers Elwood and Grant Burrows.  Phyllis was born on December 14th, 1920 in Trenton, Ontario to Fred and Myrtle Burrows (nee Spry) of Napanee.  Phyllis was a true Trentonian and a lover of golf and the Trenton golf club, bridge, her political party and beautiful things.  The family wish to thank all those who cared for her in her later years, especially the staff of Willowgrove LTC, The Bayfront Unit.  Phyllis will be remembered for her elegance and being the life of the party. She will be missed dearly by her family.  A memorial service will be held in her home town of Trenton later this summer. In lieu of flowers donations to the Alzheimer’s Society would be 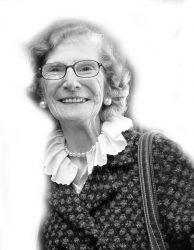 appreciated by the family.