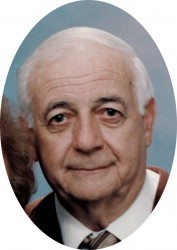 Peacefully at the Juravinski Cancer Centre on Monday, February 15, 2016, In his 90th Year.  George will finally join his beloved wife and best friend, Margaret (nee Stricker) after almost 12 years.  He leaves behind his devoted sons, Douglas (Linda), Ronald (Sharon) James (Debbie).  He will be sadly missed by his adoring grandchildren, Ben (Samantha) and Jennifer (Kevin), Andrew and Amanda, and Emily (Mike), Brayden and Katelyn, and great-grandchildren, Sean and Ryan.  He will be missed by his surviving sister, Jean.  George was predeceased by his brothers Ted, Jake, Gordon and Robert.  Always the gentleman,  George’s kindness and sharp mind will be greatly missed.  Friends will be received by the family on Sunday, February 21st  from  2-4 pm at the Turner Family Funeral Home, 53 Main Street, Dundas, where a service for George will be held Monday, February 22 at 11:00 am.  Donations to Juravinski Cancer Centre would be appreciated.