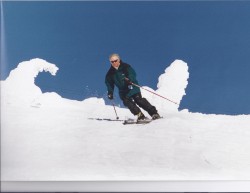 Page, Robert McClellan (Bob) – Passed away peacefully at the age of 83, on January 4th 2016 after a battle with Parkinson’s Disease and Cancer. Robert (Bob) Page of Dundas, born on October 15 1932 in Hamilton. Loving husband of Lou Page (nee Walker). Proud father of Christopher (Nina) of Hamilton, Carol of Penticton, British Columbia and Sandra (Grant) of Waterdown. Adoring Papa of Taylor, Jacob, Matthew, Adam and Quinten. Brother of Douglas Page and the late Jim Page and sister-in-law Maryellen. Bob was an avid golfer, and a long-term member of the Dundas Valley Golf and Curling Club. He was a passionate skier, teaching for many years at the Chedoke Ski Club and later on skiing as a member of the Chicopee Ski Club in Kitchener. The family wishes to extend their heartfelt thanks to the staff of Wentworth Lodge in Dundas for their tremendous compassion and care. Visitation will be held at the Turner Family Funeral Home, 53 Main Street, Dundas on Thursday afternoon and evening from 3-5 & 7-9. Cremation has taken place, and a private family interment will be held at a later date. In lieu of flowers, the family would appreciate donations to the Cancer Assistance Program (CAP) of Hamilton.