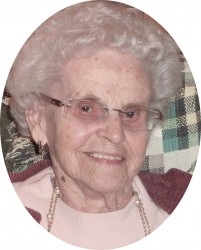 Peacefully at St. Joseph’s Villa on October 14, 2015 in her 94th year.  Beloved wife of the late Sanford Garland, dear mother of Gail Spear (Patrick Salvage), and Randall Garland.  Predeceased by son-in-law Edwin Spear, dear grandmother of Paul and Craig Spear.  Sister of the late Sterling Hunt and sister-in-law of Irene Hunt.  Will be missed by several nieces and nephews.  Marion began her career working in the secretarial pool of the Parliament Buildings in Toronto at age 17.  In 1944, she left Toronto to start her married life dairy farming on the 2nd Concession of the former Beverly Township. In later years, Marion worked at the Rockton Township Office until amalgamation when she transferred to the Flambrough Township offices until her retirement in 1987.  After retirement she continued to be active in the community by volunteering at Information Flamborough and Wentworth Lodge.  Marion was a member of West Flamboro Presbyterian Church and Life member of Orkney Women’s Institute.  The family wishes to thank the staff of Tulip Gardens for their compassion and care.  Friends will be received by the family on Monday afternoon from 12:30 until the Celebration of Marion’s Life at 2 p.m. at Cattel, Eaton & Chambers Funeral Home, 53 Main Street, Dundas.  Interment to follow at Mt. Zion Cemetery.  In lieu of flowers, donations to West Flamboro Presbyterian Church, or a charity of your choice would be appreciated.