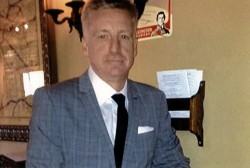 Hunter, Scott – It is with great sadness that we announce the very sudden passing of our son and brother Scott Ethan Mathew Hunter on Saturday, May 2 at the age of 49. Scott is the beloved son of Mary (nee Windle) and devoted brother of Craig and Peter (Ruth). He is predeceased by his father Pete. He has many aunts and uncles and cousins both from England and Canada. He is the loving boyfriend of Amy and lifelong friend to Roger, Rob, Julian, Rob and Heather. He had a wide circle of friends and colleagues in Toronto where he lived for many years. Scott was born and raised in Hamilton and attended Cathedral High School. He was an avid traveller and sportsman participating in many marathons and triathlons.  Friends will be received by the family on Friday afternoon from 2 p.m. until the Celebration of Scott’s Life at 4 p.m. at the Cattel, Eaton & Chambers Funeral Home, 53 Main Street, Dundas.  In lieu of flowers, donations to the Good Shepherd Centre or SickKids Foundation would be appreciated by the family.

He will always be in our thoughts and hearts. Till we meet again Scotty