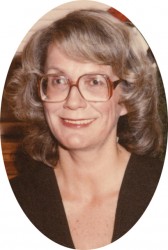 Canby, Joan Isabel (nee Breadner) 1936 – 2015 – After a brief illness, in her 78th year, Joan passed away at St Joseph’s Hospital Hamilton on February 25, 2015 with her children at her side. Joan was born in 1936 in Dauphin, Manitoba to Leslie and Effie (nee Cherry) Breadner. She is described by her surviving brother Bill Breadner as “her father’s pride and joy”. Her studies were her great passion in life, leading her to pursue a career in medicine, the only woman in the Class of 1960, Faculty of Medicine, at the University of Manitoba. After graduation and completing a general internship, she undertook specialty training in pediatrics at the Hospital for Sick Children. It was in Toronto that she met her future husband, Eugene Canby. Her pediatric practice brought her to Hamilton, where she worked for 20 years at the Chedoke-McMaster Hospital, and became involved with teaching in the early years of the medical school at McMaster. Joan is survived by Eugene and her two children Laura (Andrew) Howlett and Charles Canby, and two grandchildren Emma and Anne Howlett. She was a feminist and social activist. Joan had a great love of music, which she inherited from her mother. Music was a source of comfort, particularly during her long struggle with the chronic mental health issues which made her final years so difficult. The family would like to extend their thanks to the caregivers at the Durand Retirement Residence and the Meadows Long Term Care Centre, her psychiatrists, and the ER and ICU teams at St.Joseph’s Hospital. She will be missed. A memorial service will take place on Saturday, May 9, 2015 at 2pm at WESTDALE UNITED CHURCH in Hamilton, Ontario. In lieu of flowers, as an expression of sympathy, the family requests donations to the St. Joseph’s Healthcare Hamilton Foundation (Mental Health).