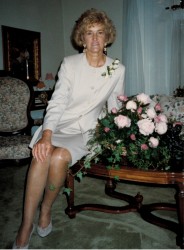 Born in Cobourg, Ontario Shirley was the daughter of the late Florence Hill and Jack Rutter. During her student days Shirley was a member of the Canadian Naval Reserve and for a time served on the Canadian aircraft carrier, HMS Bonaventure. Shirley was a graduate of Hamilton’s St. Joseph School of Nursing class of 1958.

As a dedicated, caring and highly skilled health professional Shirley worked in the Emergency Department at St. Joseph Hospital; in the community with family physician Dr. Vincent Rudnick, and since 1972 as a nurse practitioner at the McMaster University Medical Centre. In 1980 Shirley was appointed an Assistant  Clinical Professor in the Department of Family Medicine . Patients often referred to her as Dr. Shirley.

Shirley’s career exemplified her many good qualities, particularly her love of learning and generosity of spirit. It can best be described as one in which her advise was always sought and respected. As a woman of great conviction, independence and achievement she was devoted to her work, which she truly enjoyed, and to her family, which was her primary focus.

The family would like to thank the Rev. Rick Spies, Rev. Stan Wootton,  Dr. Leber (oncologist); Dr. Bates (thrombo clinic), Dr. Mulji (cardiologist), staff at the Juravinski Cancer Centre, Shirley’s medical colleagues, and our many friends for their compassionate care and support.

Friends will be received by the family on Thursday afternoon and evening from 2-4 & 7-9 at the Cattel, Eaton & Chambers Funeral Home, 53 Main Street, Dundas.