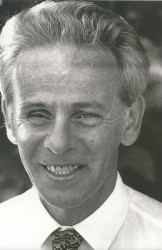 Born in Toronto, Bill’s career as a social worker with the Canadian National Institute for the Blind meant moves to London ON, Ottawa, and Hamilton before his retirement as Personnel Director for Ontario in Toronto, his home town.  In retirement Bill used his skills to fundraise for the John Milton Society, he was President from 1997 to 2000 and to maintain ties with retirees from CNIB through planning annual regional luncheons in Ontario.  Since the 1970’s he has had an interest in personal computers–joining a local club at the library for those who owned Timex/Sinclair computers. The group finally became quite elite when members filtered to only a few, meeting in each others’ homes.  Bill loved to sail when he had the chance, to camp, to read. He’d gladly wash dishes when somebody fed him. He walked every day for the past 30 years, dressed for the weather.  Friends always welcomed Bill’s cheery nature and whistle. Following his wife Margaret’s lead, Bill made many friends from around the globe at a weekly conversation group for those learning English as a second language.  Bill was predeceased by his dear wife Margaret in 2012. They were married for 69 years. He leaves so many memories for his four children and their families: Bill of Burlington, Peter of Toronto, Wendy of Dundas, and Steve of Auckland NZ, 10 grandchildren and 4 great grandchildren.  The family values the love and companionship Bill received from his dear friend Letty.  A service celebrating Bill’s life will be held at St. Paul’s United Church, 29 Park Street, West, Dundas. Family and friends are welcome on Thursday August 28 at 2 pm.