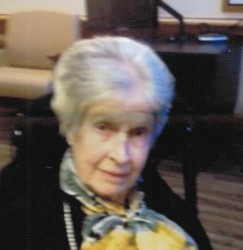 Battersby, Elsie (Heywood) –  Passed away peacefully on Sunday, May 4, 2014 at the John Noble Home in Brantford in her 99th year, surrounded by her daughter Lola, granddaughter Josie and her husband Alex Law and her great-granddaughters and their spouses Jenny (Andrew), Amanda (Jeff) and Katie (Kevin).  Elsie was the beloved wife of the late Launce (1991) and much loved mother of Nat (Helen) of Ottawa, Isabelle Park (the late Roy), Fort Erie, and Lola Brooks of Hamilton.  She is also survived by 6 grandchildren, 9 great-grandchildren and 3 great-great granddaughters.  Predeceased by her parents Wesley and Mary Ann Heywood, her sisters Jessie Radar and Bessie Campbell and her grandson Michael Park (1983).  Elsie was born September 23, 1915 on the family farm in Usborne Twp. Exeter, ON.  Cremation has taken place.  As per Elsie’s wishes a graveside service at the Exeter Cemetery will take place on Saturday, September 20, 2014 at 12 o’clock.  The family would like to thank the staff of John Noble Home Grand Terrace for the wonderful and compassionate care given to Elsie during her 2-1/2 year stay with them.  As an expression of sympathy donations to the Hamilton-Burlington S.P.C.A or a charity of your choice would be greatly appreciated.