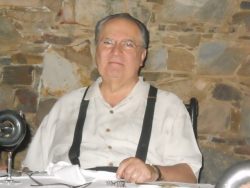 (March 14, 1932 – January 14, 2021) passed away peacefully at Emmanuel House Hospice in Hamilton in his 88th year. Loving father of Michael (Peigi) of Maple, Alex (Christina Marshall) of Toronto, Tim of Winnipeg, and Christina Palmer (Dave) of Vancouver. Predeceased by his first wife, Gertrude Papakyriakou, parents Michael and Virginia Papakyriakou (Greece), and loving aunt Alice Licos (Greece). Remembered lovingly by wife Gertraud Singh and her daughter Sheila (Stevan Gacesa) and her son Raja (Priya Arora). Survived by his sister Niki (George Thomas) of Ottawa, and her children Michelle (Christian) and James (Linda) and their families. He will also be so sadly missed by grandchildren John (Alison), Ben (Milan), Matt (Kristen), Ashleigh, Brendan, Nick, Alexander, Rafael and Rohan. Not to be forgotten, “Big Papa” will also be greatly missed by great grandchildren Theo and Troy. John arrived on Canadian soil in 1955 from Greece. Upon completing an Engineering degree at McGill University in Montreal, he moved to Ontario for a work term at Ontario Hydro in Niagara Falls. He then worked at Westinghouse in Hamilton. In November 1958, John started work at El-Met-Parts in Dundas, Ontario, a company that makes laminations for electric motors. Remaining there for 62 years, he led a management buyout of El-Met-Parts in 1987. This kept the company in Dundas, and continued to provide employment to generations of Dundas residents. In addition to being a hard-working entrepreneur, he was a devoted family man.  He made his family feel loved and honoured. A private celebration of John’s life will be held at Turner Funeral Home in Dundas on Tuesday, January 19, 2021. A larger celebration to honour this wonderful man will be held when larger gatherings will be allowed. The family would like to recognize the compassionate and professional care provided by Bayshore Home Health and Emmanuel House Hospice.  In lieu of flowers, the family encourages donations to the Panagia Greek Orthodox Church and Emmanuel House Hospice (both in Hamilton).