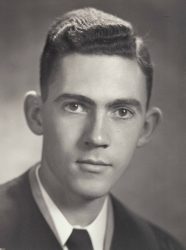 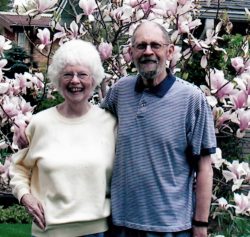 Peacefully at St. Joseph’s hospital on Sunday, December 6, in his 93rd year after a short illness. Al will now be reunited with Betty (née Major) his loving wife of 65 years (2018). Much loved father of David (Sheila), Gregory (Jill), Thomas (Andrea), Mary (Rick) and Nancy (Calvin). Proud grandfather of Rachel, Veronica, Brian, Rebecca, Stephanie, Erica, Wendy, Melanie, Natalie, Nathan, Lindsay, Craig and Sarah. Great-grandfather of Ethan, Caroline, Hartley, Owen, Benjamin, James, Lylah, and Jude. Born and raised in Toronto, Al graduated from Humberside Collegiate (1946) and received an Honours BA from the University of Toronto (1950), Ontario College of Education (1951) and Bachelor of Education from the University of Toronto (1954). It was while attending university that he met his wife, Betty. Al taught at Burford High School from 1951 to 1957, then served as principal from 1957 to 1959. At the time, he was the youngest high school principal in Ontario. His Burford years were among the most memorable of his career. Al was asked to join the Ontario Department of Education as a Special Services Guidance Inspector in 1959 and travelled the province inspecting high schools until 1962. The opportunity to spend more time with his family presented itself when he was recruited by the Hamilton Board of Education as Supervisor of Guidance Services, spending 24 years in the role from 1962 until his retirement in 1986. During his tenure he grew the number of guidance counselors to include all Hamilton high schools. In 1970 he began a pilot project to install guidance counselors in three elementary schools. By 1984 this had grown to counselors in over thirty elementary schools. While he was proud of the expansion of the guidance program, he found great satisfaction in dealing with individual students and families, and he was personally involved with the admission of Visa students, immigrants and refugees. He assessed the students’ needs, created individual tailored programs and placed them in schools, personally helping them to assimilate to their new environment. As in his Burford years, the kids always came first and he took a personal interest in each student. Al’s contribution to young people continued for many years, culminating with his recognition as ONTChild Volunteer of the Year in 1986. Following his retirement Al enthusiastically supported Betty after her ordination as a United Church minister in 1987 until she retired in 2002. His contributions to the community were numerous, including being an active member and generous financial supporter of his church. He was on the Board of Directors for Hamilton Wesley House and was active with the Kiwanis Club for 22 years, serving as President in 1970-71. Al was proud of his 113 plasma and platelet donations to Canadian Blood Services. Al and Betty travelled the world for many years, always in high style. Al was an avid gardener throughout his life and was a very proud recipient of three Trillium awards in the last five years. Above all, most important to Al was his partnership and devotion to Betty and the love of his family. He was a role model to his children and grandchildren alike. Al was always a positive person, with a clear set of values that guided him throughout his life. He loved people, and as such, people gravitated towards him. He was fortunate to have had so many wonderful friends. The family would like to thank his neighbours who provided friendship and support to Betty and Al for many years. In his retirement speech from the Board, Al summed it up by saying his two credos were “Live one day at a time and leave a little room for God”. Cremation has taken place. Hopefully a celebration of life with family and friends can be held in 2021. If so desired, a donation to The Salvation Army, Wesley Urban Ministries or Good Shepherd would be appreciated.