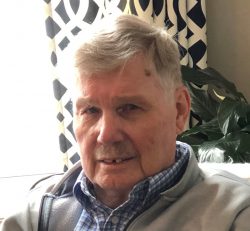 It is with great sadness, that family of Walt Wingfield announce his passing at St. Joseph’s Hospital on Wednesday, September 30, 2020. Predeceased by wife Anne (nee McTeague) in 2007. Will be sadly missed by his children and grandchildren Carol and her husband Guy Archer (Terri-Lynne and Elizabeth), Norm and his wife Lynne (Stephen and Ashley), Shelly Fetter (Andrew), his 2 great grandsons Jack and Owen and his son-in-law Dan Fetter. Walt was a step-father to Anne’s children Wendy Obbema, Paul Lain and Robin Leonard. Walt’s love was his family, hockey was his passion in all forms, from being a player, to being involved in Dundas Minor Hockey and was a longtime OHL Hockey Scout, the last one being with the Erie Otters organization. Friends will be received by the family Sunday afternoon and evening from 2-4 & 6-8 at the Turner Family Funeral Home, 53 Main Street, Dundas. Those that wish to attend, must signup at https://signup.com/go/jtWHAZo, in accordance with the BAO Covid-19 regulations attendance is limited. A private family interment has taken place. In lieu of flowers, donations to the Cystic Fibrosis Foundation would be appreciated.