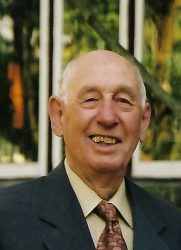 Peacefully in his 96th year, William (Bill) Alfred Paradis completed his wonderful life on Sunday, August 30, 2020. Happily married for almost 60 years to his loving wife Marie (née Steer) (1926-2006). Bill will be missed by his dear partner of later years, Barbara Grodzinski of Dundas. Proud father of Paul and Bev Paradis of Dundas, Bruce and Jane Paradis of Pickering, and Lynn and Patrick McGrade of Etobicoke. He was fondly known as “Gramps” by his grandchildren Jonathan (Heather), Jaclyn (Marco), Sarah (Trevor), Christian (Lauren), and Karen (Robb) Paradis, and Joe (Daniella), Leigh, Brenna (Chris), and Jack McGrade, and his great-grandchildren Lilly, Jayden, Scarlett, Penny, Easton and Taylor (with two more on the way).

Born and raised in Midland, Ontario, he started his career working in the Midland shipyards and later sailing lake freighters on the Great Lakes. He then moved to Toronto to start his family and was a faithful employee of CN Rail for 35 years. An avid football fan, in 1977 he was honoured by the City of Scarborough for his many years of volunteer service with the Scarborough Boys Football League as a coach and President of the league.

Dad will be remembered by all who knew him as a happy and contented man, who loved his family, a good joke, a noisy game of cards, spending winters in Springhill, Florida, and summers at the cottage he built on Six Mile Lake, which his family still enjoys.

His family will honour Bill with a private gathering. Donations may be made in Bill’s memory to KidSport Ontario – https://www.kidsportcanada.ca/ontario/donation/