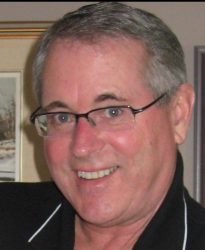 With great sadness in our hearts, we announce the passing on June 10, 2020 of John, following a courageous battle with cancer at age 71. John’s gentle, kind and loving nature will be greatly missed by his wife of 42 years, Sandy (MacCharles); daughter Jennifer and Tim Gunby; son Michael and Christine (Tavares); grandchildren (his greatest joys) Emma, James, Nora, and Mila; brother Greg and Jane of Winnipeg; sister Carol Anne and Don Halstead of Calgary; sister Lourdes and Larry Kelly of Ottawa; as well as many cousins, nieces, nephews, friends and neighbours. John is predeceased by his parents Jack and Doreen and his brother Jim. The latter part of his civil engineering career was spent as a Director of Works in Dundas, Fleet Management for the City of Hamilton, and lastly Norfolk County Engineer until retirement in 2012. John loved baking cookies with his grandchildren, travelling, cycling the rail trail, pencil drawing, and skating with his buddies followed by coffee meetings to solve world problems. The family wishes to thank Doctors: Han, Juergens, Finley, the Palliative team at Juravinski Hospital and Dr. McMillan in Dundas for their care and compassion. Cremation has taken place according to John’s wishes. A private family mass will be held. A Celebration of Life will be held at a later date. Should you wish to make a donation in John’s name, please consider the Juravinski Cancer Clinic or the Heart and Stroke Foundation.