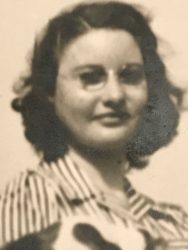 At age 98, died at Wentworth Lodge in Dundas, Ontario on August 27, 2019. Elma was born in Rosebush, Michigan, to George House and Grace Wiley House. A graduate of Central Michigan University with a BA in Education, Elma was a dedicated teacher who received numerous awards for her work – including the Jennings Scholar Award and the Valley Forge Teacher’s Medal.

She met and married her husband Ted Stanway from Toronto, Ontario, while he was working for the British Air Commission during WWII. Elma and Ted lived in both the US and Canada throughout their lives. The majority of their working careers were spent in Wadsworth, Ohio where they raised two children, Linda and Edward, and Elma pursued her education career with love and dedication. After her retirement she enjoyed sewing, collecting Royal Doulton figurines and glassware, and writing. Elma believed strongly that learning and teaching should continue throughout your lifetime and she never stopped reading and learning.

Elma will be greatly missed by her daughter, Linda Stanway, her grandchildren Rhiannon Maton, Timothy Maton and Kathryn Grace Maton (Eric Seguin) as well as her darling great-grandchildren Cedric and Felix. Her greatest love was her family. She was preceded in death by: her beloved husband Ted, son Edward Stanway, her sister Florence Van Buskirk and brother in law Gerald Van Buskirk.

Thank you to the staff at Wentworth Lodge for their care and compassion. At Elma’s request, cremation has already taken place. There will be a memorial service on November 8, 2019 at St Paul’s United Church in Dundas at 2 p.m. to celebrate her life. In lieu of flowers, please consider making a donation to Food4Kids.