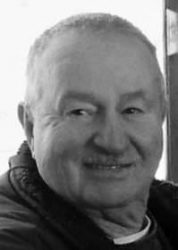 It is with great sadness that we inform you of his passing on Monday May 20th 2019 at age 78.  His daughter Brenda, son in law Kevin Humphries and lifelong friend Donnie Robertson were by his side.  He is now with his greatest love his wife Emily Mordue.  Larry had a full life with a long career at Stelco, his passion for Hockey led him to OMHA where he was a Referee for years.  He was an avid outdoorsman with many hunting and fishing trips to regal us with over the years. His archery took him all over the world.  Emily and Larry had a very large circle of friends.  He will be missed by his sons Brent and Bradley, daughter Brenda, daughter in laws Vicki and Pam and his son in law Kevin.  His cherished grandchildren Brandon, Tyler, Shayla, Kelsey and Emily-Rose Mordue as well his great grandchildren (Tyler) Maddie and Charlotte,(Shayla) Weston and Maya Mordue thank him for the great memories.  At Larry’s request he has been cremated, there will be a Celebration of His Life on Saturday June 15th from 1p.m. to 6p.m. at the Royal Canadian Legion Beverly Branch 500, Lynden Legion, 206 Lynden Road, Hamilton.  Donations can be made in his honour to Heart and Stroke Foundation.