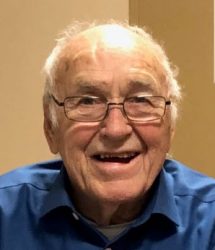 Green, Jack Frederick – Of Dundas passed away at St. Joseph Hospital peacefully on Tuesday, April 16, 2019 at the age of 94. Born on January 26, 1925 in Hamilton. He was the son of Allen and Alice Green. Jack was predeceased by his loving wife of 62 years, Norma. Jack grew up in West Hamilton with a shot gun and fishing pole in his hands, he loved the outdoors, whether hunting, fishing, camping or just enjoying a long walk. Jack also enjoyed watching sports and was a familiar face around the local ball diamonds and arenas as he followed the local sports teams. Jack always seemed to have a smile on his face and a witty comment or come back for you. Surviving Jack are his son Brett (Louie) Green of Dundas and daughter Darci Beamish (Green) of Calgary, her three children Christopher Beamish (Melissa), Kimberly Vockins (Beamish) and Cameron Beamish and his two great-grandchildren Marshall and Vayda. As well as his brother Dave, brothers-in-law Brad Clarke, Jack Peer & sister-in-law Jane Biggins. Also survived by many nieces and nephews. Jack was predeceased by his daughter-in-law Christine Green and son-in-law Dale Beamish, brothers Allen, Alf, Art, Ernest and sisters Sally Peer, Annalea (Polly) Clarke, Mary Campbell and Ellen Held. Jack will be missed by all his surviving family and friends. Special thanks to Dr. West and all the nurses and staff at Blackadars Continuing Care for all the compassion and care shown to Jack during his stay. In keeping with Jack’s wishes cremation has taken place and interment will take place at graveside with his family. If you so wish, donations to the Canadian Cancer Society or The Salvation Army would be appreciated by the family.