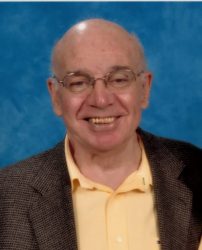 It is with profound sadness that we announce the passing of Ken in the ICU of the Juravinski Hospital, Hamilton, Ontario on September 14, 2017, in his 76th year. Ken was the beloved husband, best friend and soul mate of Carol-Anne (nee Colling). Ken leaves to mourn his children Chris (Cathy), Kevin (Leah), Jennifer and Andrew (Teresa) and stepsons Kevin and Robert (Julie) Fox. Ken was a proud grandpa to Brendan, Stephanie, Nicholas, Julia, Jared, Wyatt, Madeline and Olivia. Ken was predeceased by his parents, Dolphie and Jennie Lawrence of Durham, ON. He is survived by his “big sister” Eileen (Ken) Hooper also of Durham, ON. Ken will be sadly missed by brothers and sisters-in-law and numerous nieces and nephews. Ken was born and grew up in Durham, and upon graduation, began a career with CIBC which took him around Ontario, including stays in Burlington, Oakville and St. Catharines with various positions in the bank in the Niagara area. After 20 years with the bank, Ken began a new career forming his own bookkeeping business. That business led him to a small company in need of his special talents where he would spend the remaining 25 years of his working life proudly helping it to grow and thrive. He got enormous satisfaction in retiring as vice president of Engineered Plastics Inc. and of the long-time friendship he forged with its owner. In retirement, Ken enjoyed cruising to Alaska followed by a trip through the mountains on the Rocky Mountaineer and a road trip around Newfoundland. He was an avid reader, loved jigsaw puzzles and was the historian for the Lawrence family having over 10,000 names, with details in his Family Tree program. Ken sat on the Board of Directors for our condominium, filling in the role of financial officer. Ken was quiet gentleman with a quirky sense of humour who was always ready to help a neighbour in need. Visitation will take place on Monday September 18th from 3-5p.m. and 7-9p.m. at the Turner Family Funeral Home, 53 Main St, Dundas. A memorial service will be held on Tuesday September 19th at 12:00p.m. at the funeral home with a private interment in the afternoon at Lowville United Church Cemetery. In lieu of flowers, donations to the Canadian Cancer Society would be appreciated. The family would like to thank the doctors and nurses of the Juravinski Intensive Care Unit for the kindness and compassion in caring for Ken and to his family members during this difficult time.