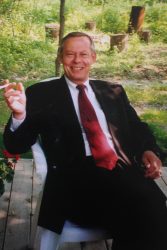 Lowe, Norman Barry  (June 11, 1940 to July 6, 2017) –  It is with great sorrow we announce the passing of Barry Lowe. Beloved husband and partner of Judy Currier for 29 years, Barry died at the Hamilton General Hospital on July 6, 2017 after a long battle with ALS. Barry is survived by his children Gordon Lowe and his wife Tammy and his daughter Brenda Lowe, as well as stepchildren Susan Currier and Andy Currier and his wife Loana.    He will also be truly missed by the joys of his life – grandchildren Quinton, Mason, Sierra and Hailey. Missing Barry and his great piano playing are sister Barbara Schlegel (husband Wayne), sister-in-law Marney MacInnes (husband Ron), brother-in-laws Norman Proud, David Proud (wife Peggy), and Peter (wife Mary), as well as cousins Phil and Peter Freeland, and many others. He is predeceased by his mother Doris (nee Tuck) and father Norman Lowe. Barry was a dedicated and involved member of the Hamilton Wentworth area for his entire life. Barry served 39 years as deputy area director of Legal Aid of Ontario.   Barry’s legal career started in 1959 as a filing clerk at Hamilton’s Supreme and County courts.   In 1967 when Ontario Legal Aid was created, Frank Weatherston, Hamilton’s first area director of Legal Aid hired Barry as his deputy area director.  Over his career Barry’s responsibilities expanded to include management of Simcoe and Hagersville offices.   During his long and distinguished career, Barry was well liked and respected.  Barry’s community involvement over the years included Hamilton Planning Board, Regional Land Division Committee, Hamilton Press Club, the Kinsman Club, the Sertoma Club, the MacKenzie King Club among others. Hobbies included curling, carpentry, playing bridge, and following the Toronto Blue Jays.  Barry and his family would like to thank his neighbors and many friends for their support, as well as the staff of the Burn Unit of the Hamilton General Hospital for their wonderful care and friendship during his long illness. The funeral service, followed by a celebration of life reception, will be held at Turner Family Funeral Home, 53 Main Street in Dundas,  Ontario on Monday, July 10, 2017 at 11 a.m. In lieu of flowers, donations to the ALS Society or a charity of your choice would be appreciated by the family.