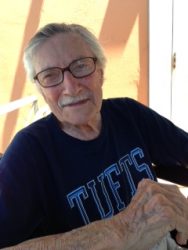 Tufts – Ralph Clifford – Just shy of his 97th birthday, Ralph Clifford Tufts of Dundas Ontario passed peacefully with family by his side on Monday Dec. 26th, 2016. Loving husband to the late Eva Lily Tufts for over 61 years, and beloved father of (David – deceased) Carolyn, (Ralph Jr. – deceased), Catherine Burke (Arthur), Gail Pellow (Bruce – deceased), Blair “Tim” (Donna – deceased), Philip (Rosanne – deceased), Valerie Snelling (Russell), Ralph will be forever remembered and dearly missed by many, many loving grandchildren and great-grandchildren, numerous nieces and nephews, extended family and dear friends.  Ralph’s life story begins in Halifax NS on January 6th 1920 and his love for Nova Scotia, the water, and boats stayed with him throughout his life providing many wonderful memories and stories that Ralph was known to share of his adventures he cherished along the shores of Tufts Cove Dartmouth NS and Bedford Basin as a young boy.  Ralph and Eva, a true love story, met in grade two, and married on April 26th 1940.  After attending Dalhousie University Halifax NS, Ralph found early that he had a keen interest and natural skill with radio communication and he turned this passion into a long career.  After starting out in Nova Scotia working for the government of Canada in communications (homeland security) during WWII, Ralph and Eva moved their young family to Hamilton, Ontario in 1951 for Ralph’s job with Bob Moody & Co.  A pioneer in the radio and television industry, Ralph was the first DJ in the Hamilton and Burlington area spinning vinyl records at the Brant Inn during the 60’s, proudly supplying the live tunes for the opening gala at the Beverly Golf & Country Club EST. 1957.  Ralph’s carrier grew in TV and Radio working for Hamilton Niagara Coaxial Co., and Hamilton Video and Sound.  Ralph continued his passion in life for amateur radio as a collector and avid HAM Radio operator (VE3BYM), being awarded the HARC Order of Merit.  Always dapper, Ralph is fondly remembered for his smart wardrobe and as a collector and hansom wearer of fine neckties and hats.  Ralph loved poetry, especially keen for Robert Frost; he loved sweets, pink panther, classic movies and was a long time member of the Royal Canadian Legion Branch 36 and Air Force Club in Dundas. A natural historian, Ralph was known for his colourful storytelling, sharing his lifelong interests, passions and humour through the stories he told with great enthusiasm.  The time he spent with family and friends while sharing these memories is a tribute to the beauty of his heart and soul. Ralph’s inspiring presence will be deeply missed by all who had the privilege to have known him. Friends will be received by the family on Monday evening from 6-9 at the Turner Family Funeral Home, 53 Main Street, Dundas, where the Service for Ralph will be held Tuesday morning at 11 o’clock. Interment Grove Cemetery. Donations to the Dundas Salvation Army would be appreciated by the family.